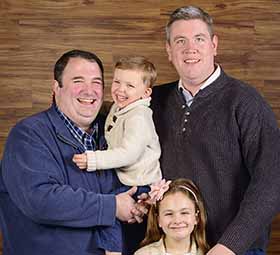 Along the course of the long and winding road of adoption, there are fits and starts. For Robert Case and Chris Teague, that was the case that led them to adopting now-9-year-old Anna and 5-year-old Christian.

“For whatever reason, we had always been thinking about adoption. I remember being younger and thinking that adoption was such a nice thing to do and that there were so many kids in need,” said Case. “I remember being a kid and seeing that. It was something we talked about.”

“Any time that we would go into Jordan’s Furniture or we would go and look at the Heart Gallery, we would look at it and say, ‘We really want to do this. But let’s wait until we’re a little more stable.’ These kids don’t need 100% of you; they need 110% of you. We wanted to be in a place where we could provide that,” added Teague.

After getting beyond the initial idea of wanting to adopt, they learned that there are classes to take (The Massachusetts Approach To Partnerships in Parenting or MAPP) and approvals to attain; as set forth by the state. According to state estimates, this process takes about 18 months to complete from beginning to end. For the family it was onto MAPP classes, which the couple found to be informative, thought provoking, and essential to their becoming parents.

“The MAPP training ended up being one of the best things about the entire process. It really prepared us for what could be thrown our way,” said Case. “Something will happen with the kids or one of the kids’ therapists and it’s something they told us about in MAPP class. Not only parents adopting should take this class, but any parent having a child anywhere should take this class. It takes to you the mindset of what a child goes through.”

For any adoptive parent that first moment of connection with the kids is a breathtaking moment. There’s a certain innate magnetism when you see your kids for the first time. There’s no rhyme or reason behind it; when you know, you just know. This was the case for Case and Teague when they first laid eyes on Anna and Christian.

“We were told in our MAPP class that you will know when you find your child. You will just know. For some reason when our kids were brought up to us, we were just drawn to them. There was something in our guts for both of us, and we hadn’t seen a picture yet we just had basic info and we thought we had to pursue this,” said Case. “We had the disclosure meeting where we learned all about the kids and we wanted to move forward. At the end of the meeting, we saw the picture and it was like a ton of bricks hitting you. There was no question that these children were just meant to be with us.”

Adoption day is an emotional experience for children and parents alike, and for Case and Teague, this was certainly the case. Surrounded by friends and family in a courthouse in Worcester, Mass., the Case-Teagues doubled in size from two to four.

“There’s some paperwork you have to fill out and check off at the court and it didn’t really hit me until they asked us to proofread the new birth certificates,” said Case. “When you see their name with your last name, for me that was a really emotional moment. It didn’t feel real until we saw their name and there was my last name. Nothing could ruin that day. That was even before we went in to talk to the judge.”

Not only did both Rob and Chris have paperwork to sign, but so did Anna and Christian to “adopt” Rob and Chris to be their parents as well. With the strokes of a couple of pens, the adoption became finalized and the Case-Teagues became a family. 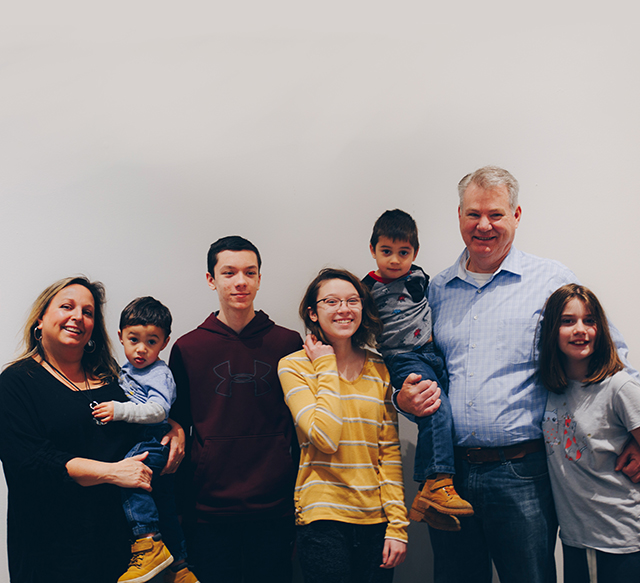 Toni and Bill Maher's connection with adoption began in a supermarket of all places. While…